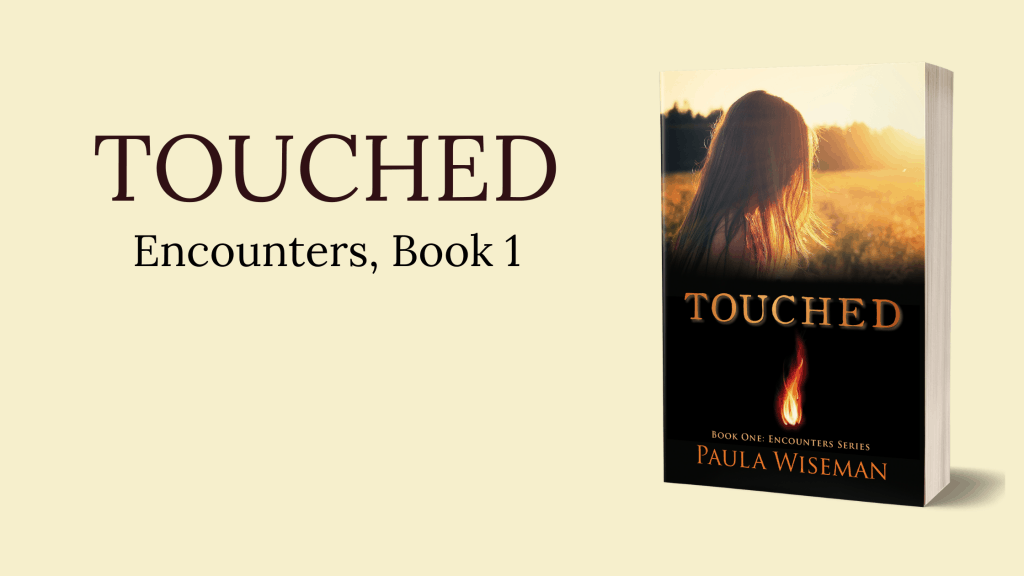 Last week, I had planned an update for today. Things were starting to happen quickly with Touched, like the interior design and wraparound cover which meant release day couldn’t be too far away.

Before I could get today’s post written, I got word that things were ready to go and December 8 would be the release day for the Kindle version. (The paperback will follow soon after.) Just four more days! Circle the date! Tell your friends!

(Not convinced? You can read the first 7 chapters to whet your appetite.)

You might think after going through the release process a number of times, it would get to be routine. Not so. Each book is different, and just as every pregnancy is different, each process of bringing a book into print is different, marked with unique challenges.

Here are the things that make me nervous:
This book starts a new series. The other books depend on this one.
It’s in first person. I’ve never written first person before.
The subject matter is difficult. Writing about things people have experienced always makes me anxious.
I started a part-time job in June, so time has been tight, and I don’t feel prepared for the release.

Here are some things that reassure me:
Initial feedback has been good.
I have you. You are tremendously loyal and supportive. I love writing for you. Thank you.

Now, I’ll let you in on a little case of life imitating art…

Three years ago, my husband entered seminary. He’s working on a master’s degree in Apologetics and Worldviews. His plan, and he believed God’s plan for him, was to teach once he retired. Then the preaching classes came. Two weeks ago, he announced to our church that felt the call of God to enter the ministry, and more specifically, the pastorate.

I don’t think it’s really a spoiler to tell you that in Touched, Donna wrestles quite a bit with Phil’s call and her own feelings of being inadequate for the job of pastor’s wife. God at least has a sense of irony, if not humor, at this 100% introvert being called to this particular ministry. Of course, God has proven faithful in every other adventure He has called us to, so I’m sure He will be in this one, too. I’ll keep you posted.

In the meantime, I’ll keep typing. Right now, I’m working on some backstory in preparation for the edits on the second Encounters book.

So when is the next book coming out? Not nearly soon enough for either one of us. Since graduation, we’ve gone from vacation to summer theater to VBS to finally catching our breath this week while my husband is spending the week on campus at seminary. We’ll have two more quiet weeks before band camp starts and we’re off again.

My oldest is getting ready for college this fall, and a small avalanche of paperwork has hit the house over the last few months. In a not totally unrelated piece of news, I took a part-time beginning June 1, so the long summer mornings I had planned to spend whipping this latest book into shape suddenly evaporated. In another six weeks or so, school will start again and I’m not sure how my schedule will shake out.

With all that said, my goal is STILL to get this book ready by fall. I’m a little better than halfway through the really heavy edits and rewrites (and first writes!). The first draft for this one was only about 50,000 words. (The other books run around 90-120,000 words.) But that’s okay. There were many spots that I left with a sentence knowing I’d fill in paragraphs later. Now it’s later.

Once I get through this draft, I should be able to post some preview chapters for you. I appreciate your loyalty and your patience. I want to ensure the book you get is the best it can be and I thank you for letting me take the time to get it right.

So how’s your summer?

Here’s a quick update on my projects.

The draft for Book 2 in the new series is done (finally!) which means I have moved on to the edits for Book 1, Touched. The beginning of this one needs a lot of work, but it should smooth out after that. I hope to have chapters for you by late summer. After the draft of Embraced, though, I’m not nearly as optimistic.

Resolute has won a second award. It was named a 2015 Next Generation Indie Book Award finalist in Inspirational Fiction. You can read the press release.

I got nice new chair for my office.

What’s new with you?

From the opening pages of Scripture, no one who has encountered a holy God has come away unchanged. Adam, Abraham, Hagar, Moses and many, many others realized that God is not distant but a God who … END_OF_DOCUMENT_TOKEN_TO_BE_REPLACED

A covenant is a solemn, binding agreement. God chose to unilaterally enter into a covenant with Abraham. No matter what Abraham said or did, God vowed to uphold the terms and bless Abraham. Marriage … END_OF_DOCUMENT_TOKEN_TO_BE_REPLACED

Jesus told a parable about a wise builder and a foolish one, underscoring how important it is to have a solid foundation. He declared that obedience to His word was the surest foundation of all. In … END_OF_DOCUMENT_TOKEN_TO_BE_REPLACED